Writing skills for marketers in the digital age

This article appeared in the PM Forum Magazine in April 2018 under the title “Finding the right words”.

At the end of last year we passed the 25th anniversary of the first text message being sent. I’m pretty sure I didn’t have a mobile phone capable of such marvels in 1992. In fact, 25 years ago I don’t think the PC on my workstation was even networked to a printer and I would have had to save my work to disk and take it to a machine that was.
Having to jump through those sorts of hoops did make you think very hard about what you were going to write/type, and indeed whether it might be easier to just pick up the phone.

Fast forward to the present day and the average UK office worker sends and receives 10,000 emails a year and one in ten of us never makes a phone call at work. We are writing more in our working lives than ever before and many of us do so for external audiences and publication, even if we don’t regard ourselves as copywriters per se and it’s just 280 characters on our firm’s Twitter account.

Yet there doesn’t seem to have been a proportionate increased focus across the board on supporting business writing skills for marketers – albeit I have come across pockets of excellence over the years. I think it is very much worth making a case for its growing importance. Not only does good and effective writing matter but, if anything, it has become more challenging to achieve in the face of the need to produce content for a more diverse, more demanding audience, whose attention we have to compete harder for over a wide variety of medium.

One of the interesting business writing challenges facing everyone in the workplace but marketers particularly, is the reduced formality in the workplace. As mobile phone companies were perfecting text messaging in the early 1990s I remember a client firm of mine was writing hard copy memos (remember them?) encouraging colleagues (or “all staff” as everyone tended to be called then) to dispense with the tradition of using honorifics and surnames and to use (gasp!) first names instead. Resistance to change was ultimately futile, as The Borg would say, but such habits persisted longer than you might imagine.

In these more enlightened times a more informal workplace, while a huge and welcome development in many ways, can be a bit of an etiquette minefield for the unwary. Like getting the dress code right on dress down Friday. Expectations and ideas of what is and is not appropriate linguistically in the workplace can vary wildly.

Technology has contributed to the challenge. Just as communications and writing styles had to adapt to email – over memos, letters and telephone – mobile messaging is beginning to create a whole new minefield. Mobile messaging, while great at cutting through the noise of full inboxes, needs to be handled with care. Quite apart from the fact that chat apps, etc. are usually outside of the formal corporate audit trail and thus to be used in a business context with caution, if at all, they facilitate a casualness that isn’t always a good idea. It is all too easy to be unguarded in messaging both in what people say and how they say it. For example since when did “sure” as an affirmative response to a request in the workplace become the norm or emojis for that matter – use with caution.

I find that people tend to sense the bear traps with external audiences more readily but without internal stakeholders onside it’s impossible to get anything done – it can help to think of key stakeholders as being internal clients, it can keep you on your toes.

What do you want?

A lot of what marketers do for a living involves trying to get people to do what we want them to. We have to be professional askers and persuaders. We want people to come to our events, to give us their time and ideas, to deliver something on time and on brief, to agree to our plan/campaign idea, to sign off the bill/budget, to fill their directory submissions on time, to give us their business and so on.

Marketing needs to be good at asking for things – internally and externally. Oddly however it is often something we struggle with for fear of being “too salesy,” too blunt for professional services for example?

But with 10,000 emails coming your audience’s way you don’t have time to beat around the bush.

How often have you finished reading something and thought well that’s all well and good but what am I supposed to do with that information? Be really clear what you want – don’t be coy as the call to action needs to be clear.

What does the client want?

Anyone who writes for a client audience needs to spend time listening to them, particularly the further away you are from their own experience. Getting the tone, style and terminology wrong can disengage or even actively alienate your audience.

The risk for marketers is that the sheer effort of managing the plethora of communications channels we now have to deal with takes our eye off making sure the needs, wants, desired response and reaction of the end audience gets effectively baked into content programmes.

Digital marketing metrics rarely tell the whole story and can be unhelpful in isolation or against benchmarks that may in themselves be somewhat arbitrary. A classic example is split testing emails – just because one idea scores better than another doesn’t make it a good idea necessarily.

Good ideas and copy that resonates come from really getting under the skin of the client. Yet investing in talking to the end audience about how they consume our content, why, what they do with it and how they react to it remains relatively rare.
In SEO this is particularly key – get it wrong and your content may barely be viewed at all. As Google says, “make pages primarily for users” and as Moz.com puts it “search engines are answer machines” so it helps to know what the users want and what questions they are asking.

Don’t try and do too much

It used to be said that sub editors on The Sun got paid more than any other newspaper – the argument being that coming up with really short headlines was harder than writing long ones. Whether true or not, now that 75% of us have a smartphone and a growing proportion of website content is read on something that’s smaller than A6 on speed scroll, keeping it as short as possible while still meaningful is more important than ever.

Never use a long word when a short one will do, stick to short sentences and short paragraphs. It’s not the same as dumbing down – ask any newspaper sub-editor (a precious but dying breed sadly). I used to work with someone who had a “rule of three” eg. no more than three lines in a sentence, three sentences in a paragraph, points on a PowerPoint slide, question in an email, etc. It is not always possible but it’s worth aiming for as we could all self-edit harder.

This old adage applies to business writing as much as to writing books. Not only does tight copy require a good knowledge of the subject at hand (which involves reading round – osmosis only works so far) but a sense of how good writers express themselves is helpful. There are some good books on writing out there and it’s worth having a decent style guide to hand.

I leave the final word to Jack Kerouac: “One day I will find the right words, and they will be simple.” 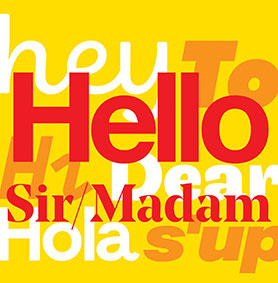